There have been many testaments that cancer responds to natural treatment methods.

My guest Dr. Gosia Kuszewski affirms that healing by natural medicine is effective. Kuszewski has a robust system of Holistic health that helps people to detox, lose weight and rid the body of cancer.
Furthermore, she says using only 100% natural, safe and remedies has been proven effective by natural medicine to heal the body.

Surrounded By Nature Kuszewski grew up in Poland where she lived until she was 20 years old. She then moved to Australia with her mom and had been based the land down under for 30 years. Life was harsh in Poland as Kuszewski described it, but she had a close connection with nature.

Not surprisingly, it nurtured her desire to explore the healing nature of plants since then. Have you tried envisioning a life without eating food from McDonald’s or Burger King? Well, Kuszewski says her family has a long tradition of fermenting foods, cooking soups and preparing meals from scratch.

Hence, fast food was not familiar to her back then. Upon moving to Australia, Kuszewski pursued her love for plants and yearned to learn about Naturopathy. Consequently, she fulfilled that dream by taking classes at the Southern School Of Natural Therapies in Melbourne, Australia.

Devastating News It took Kuszewski five years to get a degree because she was not fluent in English when she went to school. She was likewise unsure of what career path to take after she graduated. However, as Kuszewski was figuring out how to maximize her education, her mom developed lung cancer at the age of 56. It certainly caught the family by surprise because Kuszewski’s mom was known to have a healthy lifestyle.

Consequently, Kuszewski started to do intensive research to educate herself about cancer and treatments. Understandably, she felt confused, helpless, angry, fearful and frustrated about the whole situation. However, Kuszewski says there were only three standard treatments available that time —- surgery, chemotherapy, and radiation. It certainly took a lot of thorough assessment deciding on which treatment was the best option. Stress plays a significant role in our fast paced lives. From the foods we eat to the lifestyle we lead, stressors can have many negative effects on the body. Thankfully there are simple proven stress reduction tools that can support the body when it needs it the most. 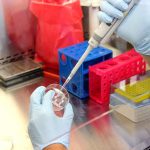